After taking a year off due to the high number of canceled events related to the pandemic in 2020, the Mid-Florida Golden Retriever Club will resume its year-end dog awards in 2021 with some changes, including splitting a previous category into two separate awards.

With the previous Field Dog of the Year award split into Field and Hunt categories, the MFGRC is offering the following awards for 2021:

Agility Dog of the Year

Field Dog of the Year

Hunt Dog of the Year

Obedience Dog of the Year

Rally Dog of the Year

Show Dog of the Year (Conformation)

Tracking Dog of the Year

Recipients of all awards listed above receive custom car magnets created by K9 Designs and presented by MFGRC. In addition, the recipient of Show Dog of the Year receives a special award of a perpetual trophy donated by Wonderland’s Golden Retrievers.

Gold Standard Challenge — awarded to the owner handler accumulating the highest points in breed shows and field events during the awards year, with award donated by MFGRC member Kristin Sipus.

The awards competition application will be made available later in the year, with the deadline for applications set for Nov. 30. Awards will be announced and presented at the MFGRC’s annual Christmas party on Dec. 18. 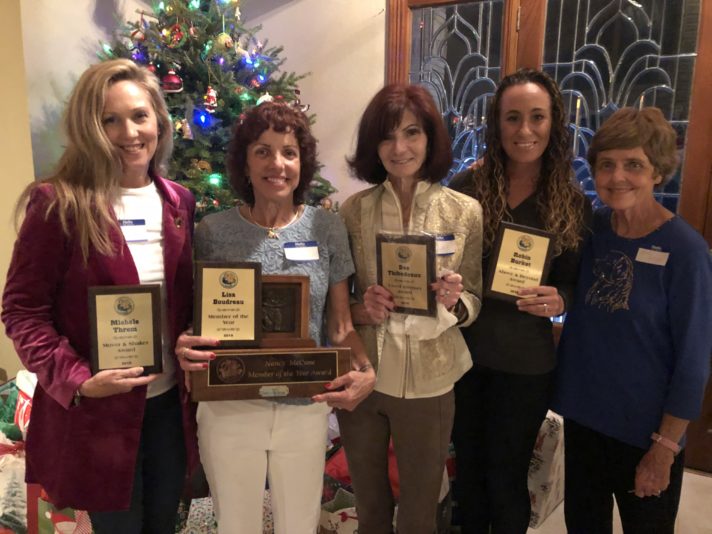 The Mid-Florida Golden Retriever Club announced its 2019 year-end awards recipients and winners at the club’s annual Christmas party on Dec. 14 at the home of club president Ann Rowe in Sorrento, Fla.

Dog of the Year award winners received custom car magnets from the club that were created by club member Anney Doucette of K9-Design.

Agility Dog of the Year

Peaches (Picabo’s Sweet As A Peach MX MXJ OF)

Field Dog of the Year

Obedience Dog of the Year

Rally Dog of the Year

Show Dog of the Year

Tracking Dog of the Year

Versatility Dog of the Year

Above and Beyond Award:

Nancy McCune Member of the Year

Members of the Mid-Florida Golden Retriever Club who earn new titles for their Goldens during calendar year 2019 may be eligible to receive a new title rosette from the club. The rosettes will be similar to this one from 2018 being modeled by Ralph and Maria Orlando’s Golden boy Smokey: 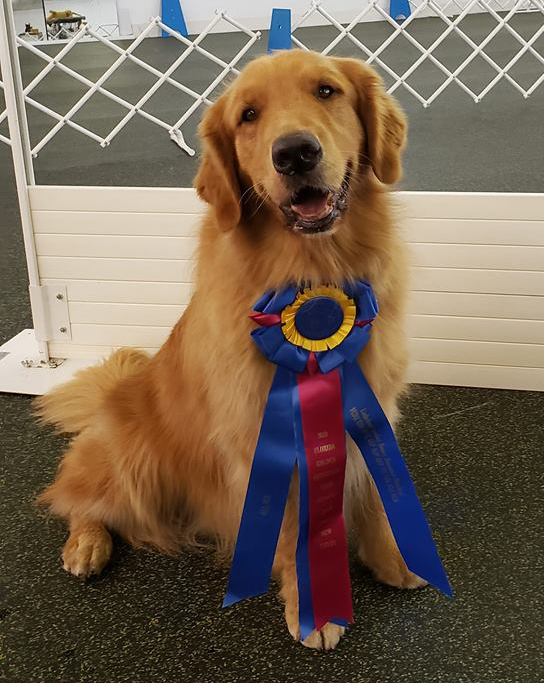 This year a stipulation has been added to the process: in order to be eligible to receive a new title rosette from the club, a member must have volunteered to work for at least one club event during the year, or have done equivalent work for the club behind-the-scenes (subject to verification). The stipulation was added to encourage members to help with club events.

If your dog has won a new title in 2019 and you feel you are eligible to receive a rosette, please email the full name of the dog, what the title earned was and what event(s) you worked at to MFGRC board member Robin Burket. Robin will order the rosettes later this year and make them available for pickup early next year. If you will not be able to attend an event to pick up your rosette, you will be asked to send a check for $10 for postage and handling, made out to MFGRC, so that it can be mailed to you.

Robin’s email address is robin.c.lemieux (at) gmail (dot com). The deadline for submissions is December 31, 2019.

The Mid-Florida Golden Retriever Club announced its 2018 year-end awards recipients and winners at the club’s annual Christmas party on Dec. 15 at the home of club president Ann Rowe in Sorrento, Fla.

END_OF_DOCUMENT_TOKEN_TO_BE_REPLACED

The Mid-Florida Golden Retriever Club will once again be offering year-end awards for members and their dogs who accomplish great things in 2018.

The club will offer “Dog of the Year” awards in the categories of show, tracking, field, obedience, rally and agility along with a “Versatility Dog of the Year.”

Members must apply for the awards with an application that will be made available late in the summer.

The award period is from Dec. 1, 2017, through Nov. 29, 2018. Dogs must reside with the person making the application. To be eligible for any award, the club member must have volunteered/worked at two club functions (or equivalent work for the club) during the awards period and attended one of the club’s general meetings.

Entries are now being accepted for the Gold Standard Challenge, a unique award open to MFGRC members who compete as an owner-handler with one dog in both field and conformation. Full details are available here. All applicants who meet the requirements will be awarded a special prize. Please send points with names and dates earned to kjsipus@aol.com – deadline is November 30, 2017 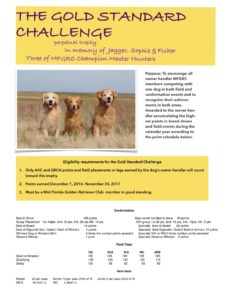